Sign Up Sign In
Community Browser
Turn on suggestions
Auto-suggest helps you quickly narrow down your search results by suggesting possible matches as you type.
Showing results for
Search instead for
Did you mean:
The January release is out—click here to see what's new in DataRobot.
Options

Time Series Over Time Plot Does Not Correspond to Data

Time Series Over Time Plot Does Not Correspond to Data

I have a specific case in my time series project and I was wondering if anyone has encountered such problem.

I have data with 10 series that I upload to DataRobot. The data is ordered by series name and date and has around 20% missing values in the target (sales) that are equally distributed among the series.

When you initially look at the sales over time for one of the series, there seems to be a lot more missing values than 20%. 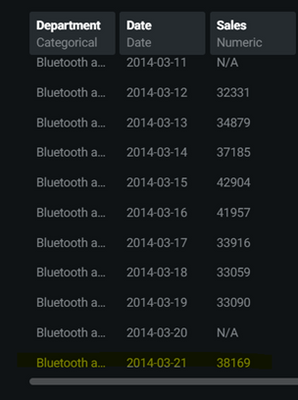 The over time plots in the chart you shared are sampled. If you build a model and go the Accuracy Over Time plot, you should be able to see the full history per series.