Symbolic Regression from Scratch with Python

Turn on suggestions
Auto-suggest helps you quickly narrow down your search results by suggesting possible matches as you type.
Showing results for
Search instead for
Did you mean:
You don't have to sacrifice model accuracy for interpretability. Join Tuesday's Learning Session to find out how.
Options

Symbolic Regression from Scratch with Python

DataRobot supports many different modeling approaches. One of the more interesting ones is symbolic regression, which is used in Eureqa models within DataRobot. The Eureqa algorithm uses evolutionary methods to search through many different types of models to find one with high accuracy and low complexity. (DataRobot customers: to learn more about this algorithm, search the in-app platform documentation for Eureqa Models.)

What is symbolic regression?

Regression is the process of attempting to figure out the relationship between some variable (called the “target”) and one or more other variables (usually called “predictors” or “features). More traditional machine learning techniques, such as linear regression or decision trees, require that you first choose the general form of this relationship and then use statistical techniques to estimate some set of parameters to create a model of this relationship. The symbolic regression process is different in that it attempts to determine both the form of the model and its parameters1; this might be a complex non-linear equation or even actual code in some programming language.

In this article we will be learning about how symbolic regression works by building a system for performing symbolic regression from scratch. The only required knowledge is a basic working knowledge of Python. Some experience with recursive functions will also be helpful as we will be working with tree-based data structures. Of course there are several freely available symbolic regression software packages out there which are well suited to this task; however, understanding the internal workings of the algorithm not only will interest those who are curious about the algorithm’s inner workings, but also help to give some insight into the various tunable parameters used in these systems.

Perhaps the most common technique used in symbolic regression is genetic programming2 (GP). This process starts with an initial set of random programs (the first “generation”) and makes small changes to the best programs from that generation and each subsequent generation to produce new programs. Repeating this process over and over usually will produce generations containing programs which are on average more accurate than ones from previous generations.

An example use case for symbolic regression

Let’s use the “Auto MPG” data from UCI: http://archive.ics.uci.edu/ml/datasets/Auto+MPG to understand symbolic regression. This data contains fuel consumption information from a variety of different vehicles. We’ll attempt to find some formula to estimate “mpg” (miles per gallon) based on other attributes of the vehicle such as weight and horsepower.

First, let’s read in the data and do a little preprocessing:

The target we’re trying to predict for our experiment is “mpg.” We remove the non-numeric field “car name,” and also replace missing values in “horsepower” to ensure that we only have non-missing numeric features for the equations that we will be generating.

Deciding on a programming “language”

One of the key decisions in symbolic regression is how to represent the programs we are creating3. This can be anything from a simple mathematical equation to a full-featured programming language with loops, functions, and other control structures. To keep things simple we are just going to stick to mathematical equations involving addition, subtraction, multiplication, division, and negation.

Equations (or programs) in our system will be represented by trees since this will make genetic operations such as mutation and crossover easier than if they were in more traditional infix form4. For example, the equation (horsepower + cylinders) * weight can be viewed as a tree: 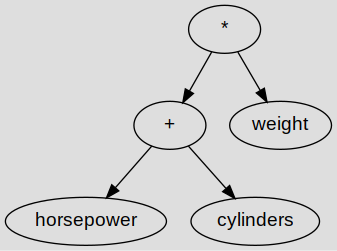 These trees will be implemented as Python dictionaries:

Of course we will also need a way to run these programs, so let’s create a method called evaluate() which will execute a program given a single row from the data:

Creating the first generation of programs

Now that we have our basic infrastructure in place, we can start work on the actual GP implementation. The first thing we need to do is generate an initial population of random programs. These random programs will be composed of arbitrarily chosen functions and values taken from the data. For demonstration purposes, we’ll just limit available functions to basic arithmetic operations:

safe_div() is necessary to ensure no invalid programs due to division by zero errors are created which is a common hazard with randomly generated programs5. Next, let’s add some code to create random program trees:

We’ve just introduced our first genetic programming parameter, POP_SIZE, which determines how many programs are generated in each generation. The first generation always has 100% randomly generated programs. The random program generator creates program trees by starting from the root node and arbitrarily choosing to create either a function node or a feature node. In order to create relatively balanced trees with limited depth, the probability of creating a function node is higher near the tree root; as we move deeper into the tree, more feature nodes are created.

The next piece we will need is code to produce new programs (offspring) from the current generation of programs. We’ll implement the two most common genetic operations used in GP: crossover and mutation. Mutation involves choosing a random point in a selected program and replacing it with randomly generated code:

Crossover involves selecting two programs from the population, choosing a random node in each program, and then replacing part of the first program with part of the second:

Both operations require selecting a random node in the programming tree:

Now that we have code for random program creation and random node selection, we can create the mutation operation:

Also, we can code the crossover operation:

The next piece we will need is the ability to select programs from the current generation to serve as the basis for the next generation. We would like to choose programs which have a high fitness (i.e., they provide a good estimation of the target we are predicting). However, if we just rank the programs and select the best performers then after a few generations we will have a population with low diversity: all of the programs are very similar. This tends to not produce good results in genetic algorithms. Instead we will use what is known as “tournament selection.” This process involves selecting a specific number of randomly chosen programs from the population (the “tournament size”) and then choosing the one with the highest fitness. This way all programs have a chance to produce offspring; which ensures diversity in the next generation while also making sure higher fitness programs are selected more often.

The code for using tournament selection to select one parent looks like:

Finally we have the code we need to create the offspring that will make up new generations of programs. To create a new child program we do the following:

This will select one (for mutation) or two (for crossover) parents using the tournament selection code above. The parameter XOVER_PCT controls how many children will come from using crossover instead of mutation. Genetic programming researchers have found that favoring crossover tends to produce better results, so we’ll set it to 70%.7

The final piece we will need is a way to determine the fitness of programs. Since we are trying to perform regression analysis we will use the accuracy of a program’s output when compared to the actual target as our measure of fitness. Since our target (mpg) is fairly close to being normally distributed, we will use Mean Squared Error (MSE) to score our predictions. We will also need to perform some type of regularization as there is really no limit on how complex the programs we create can get. As with most machine learning techniques, overly complex models tend to fit training data very well but generalize poorly to unseen data.8 Therefore we will adjust the MSE score with a penalty which increases based on the number of nodes in the program tree:

Increasing the parameter REG_STRENGTH will increase the MSE score for more complex programs which may be overfitting the training data. (Note: Increasing MSE corresponds to lower fitness since MSE is a “lower is better” metric).

Putting it all together

So now that we finally have all of the pieces we need in place we can start the actual symbolic regression process. We are going to start with the initial random population of programs we have already created. For subsequent generations we will select parents via tournament selection and produce offspring using mutation or crossover.

Running the above code produces:

There are a few interesting things to note in the above output. The first is that the final program contains a double negative which is not something normally found in mathematical equations. Most complete genetic programming systems include a program simplification step to deal with any redundant or meaningless code that was generated.9 Also note that the median population fitness decreases and levels off. Decreasing population fitness is the main mechanism by which all types of genetic algorithms reach some goal.10 In practice, there is always a parameter such as MAX_GENERATIONS because eventually population fitness stops increasing—although allowing the process to continue may still produce better programs due to the randomness of the process.

We’ve shown that it is possible to create a symbolic regression system with a small amount of Python code. There are plenty of improvements which can be made to this basic system, such as adding a program simplifier or allowing more math functions or loops/conditionals. Working through this process has hopefully also provided some insight into how these systems work and what the various tradeoffs are when designing them.

Code for the examples presented in this article can be found in the DataRobot Community GitHub.

4 Cramer, Nichael Lynn. "A representation for the adaptive generation of simple sequential programs." Proceedings of the first international conference on genetic algorithms. 1985.